The Making of Finding Winnie - Part 3

When my not-yet editor Susan Rich first sent me Lindsay Mattick's manuscript for Finding Winnie, she described it as "full of wonderful things to bring to life; a sea of white tents at the army barracks, a parade of ships crossing the ocean in 1914, The London Zoo..."
From the very beginning I was excited to paint the parade of ships.
"Nobody had ever tried to float so many people and animals across the Atlantic Ocean before.
Thirty ships sailed together, carrying about 36,000 men, and about 7,500 horses...
and about one bear named Winnie."
I sketched the image above, which was how I imagined the parade. I read that Harry and Winnie had been on board the S.S. Manitou, one of the many merchant ships escorted by warships in formation across the Atlantic Ocean.
It was pretty easy to find an image of the S.S. Manitou. 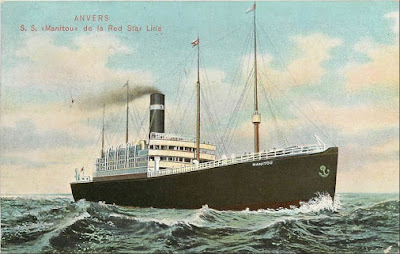 I could have just made up the other ships, but I thought, there are people who are serious about ships, and they will know I just made them up. So I went looking for  reference photographs of the convoy. This was the only one I could find. It was war, after all, and the Canadian army didn't want the enemy to know they were coming, so people probably weren't encouraged to take snapshots. 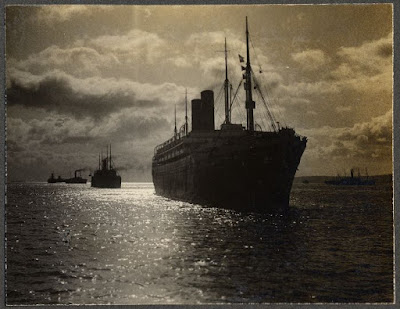 And it's a pretty striking photograph, but it didn't tell me much about what the individual ships looked like. Then I found this painting by Lieutenant Commander Norman Wilkinson,
called Canada's Answer, which gave me a few more clues. 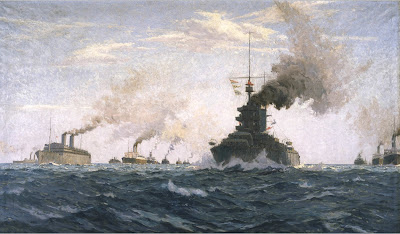 Then I found a very helpful website with an archive of primary documents from the Great War (gwpda.org) and found a list of all the ships and the order in which they sailed. I drew lines radiating from the S.S. Manitou and did image searches for those ships in lines, trying to get one whole set. It was a bit like bingo.

They sailed at sunset, so a red sky made sense, but it was also meant to suggest the war they were sailing towards. From the painting above I saw some ships were flying signal flags. I read (more than I ever imagined I might) about signal flags from my studio mate Brian Floca's extensive library, and just so you know, I tucked a secret message into that string of flags. 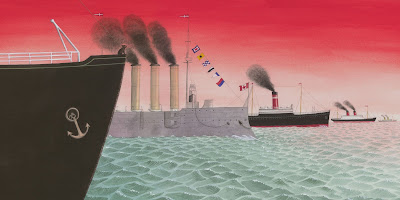 Do you notice anything else in this picture? The Canadian flag? The book had gone off to the printer and at the very last moment somebody noticed that the flag was the maple leaf. Which was designed in 1965. This convoy took place in 1914. Oops. Thank goodness we were able to fix it in the nick of time. 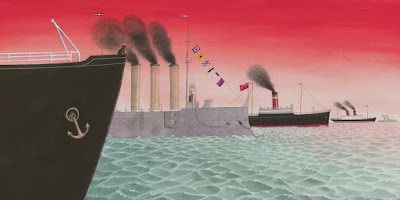