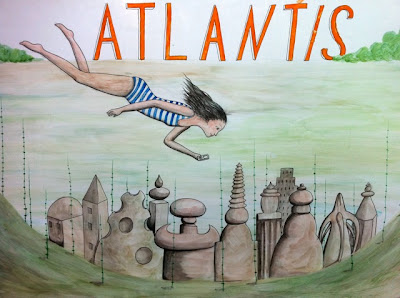 This week I am up at a Summer camp in New Hampshire, called Beam. It's a camp which invites artists, architects, engineers, craftspeople, teachers, designers, chefs and musicians to collaborate with kids on projects which require invention and adaptation and creativity and resourcefulness and humor. Right now the kids are working on a project with U.K. art/architecture team, Wignall and Moore, on a project called “The Story of Machines That Never Flew,” an aerial installation of fantastic aircraft dreamed up by thinkers and dreamers, ancient and modern. Beam campers and staff are constructing and documenting their building of a collection of distinct mechanical and sculptural inventions to tell the stories of the designers whose imaginations soared but whose creations never left the ground. I've seen parts of a boat-shaped airship and feathered wings and a giant squid and all sorts of other intriguing things taking shape around camp.

So what am I doing here? I am doing a project called Atlantis! I have always been interested in displaced things; a subway train at the bottom of the ocean, a lion in Harrods, a rusting ship in the desert and a city at the bottom of a lake. We are going to make that city. Smallish in size, with fantastical, futuristic, Gaudi inspired buildings. We are going to design the buildings and make molds and pour concrete and embed them with seashells and mosaic from smashed plates (who doesn't like smashing plates?). And then we are going to sink the city in the lake. And film it underwater. It's deeply exciting.
Of course this is way out of my field of experience. I am reading everything I can read about hydrocal cement, and feeling only a slight wave of panic. I'll keep you posted on our progress.
Posted by sophie blackall

wow sounds exciting! i've always like the idea of an underwater city!

I would also like to see the Lion at Harrods. Did you already paint it, or is it in your head still?

This sounds amazing! I would have loved that camp as a kid--- actually I still would!

sounds amazing! I can't wait to hear how it turns out.

What a fun cake! Also, when I see this post on my Google reader I see more boars than on your blogspot. They are anxiously waiting. Love it. Wish I lived in NYC. Missouri might be a little bit far of a commute. Have fun with the class.